This is the seventh entry in “It’s the Economy, Stupid” a 15-part series analyzing the local economic news in five swing states. 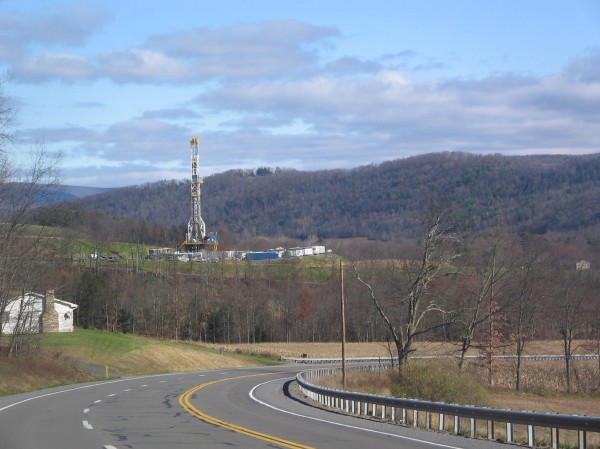 Sardonic websites are dedicated to lampooning the Washington Metro. But it is wonderful to rely on the region’s at-times dysfunctional public transportation throughout a month that witnessed the average price of gasoline rise by 30 cents. To that national energy issue, Pennsylvania adds two of its own: Marcellus Shale gas and Sunoco refining. The Keystone State kicks off the second half of this series, with its energy-related, economic news.

In December, Sunoco – a major American petroleum manufacturer, retailer, and the sole provider of NASCAR’s fuel; announced that it would close its Marcus Hook refinery in Delaware County. The plant was founded in 1902, refines light sweet crude oil, and had several hundred employees. That decision came alongside one by ConocoPhillips, an integrated energy company, to close its refinery in Trainer, PA. With 490 individuals scheduled to be laid off, The Philadelphia Inquirer reported that the local zoning board voted to limit the future use of the facility by Sunoco – targeting the storage of Marcellus Shale gas. But that is not the only Sunoco site receiving attention.

The decision to close Marcus Hook was just one step in Sunoco’s plans to exit the refining business. According to the CEO, and as presented by the Pittsburgh-Post Tribune, the firm lost close to $1 billion over the last three years in that enterprise. Another step to avoid future losses is the scheduled closure of its Philadelphia refinery in June. Unlike the closure of relative minnows Trainer and Marcus Hooks, a report released Monday by the Energy Information Administration found that the Northeast could be “significantly impacted” by this third closure. The single facility represented just under one-fourth of the region’s refinery capacity in 2011. As consumers buckle under rising gas prices, the prospects for increased instability can only add to their concerns. Still, on the other side of the state, it is the expansion of energy production that commands attention.

Even as the more liberal-leaning Pittsburgh Post-Gazette highlighted a study by Earthjustice, a California-based environmental advocacy organization, noting the impact of pollution from small industrial power plants, its conservative-leaning counterpart emphasized the considerable job growth in the mining industry that has come from the boom of Marcellus Shale gas. Although the smaller plants are not necessarily using natural gas, the absence of Marcellus Shale attention in the Gazette underscores the budding partisan divide on the issue. For its part, the Tribune fails to note that the growth of “drilling jobs” comes in an industry that only represents 1% of total state employment. Still, there is room for bipartisanship with regard to a natural gas drilling impact fee.

According to an article in the Tribune, such a fee has been under discussion in the state legislature since 2009. At that time divided government prevailed, with a Republican-controlled Senate and Democrat-controlled House. Despite the now unified GOP-majority government, the two bodies remain at odds, with the Senate favoring a mandatory state-wide fee and the House advocating an opt-in provision for affected counties. For their part, the sidelined Democrats favor a higher fee than is found in either proposal. Need for the revenue from such a fee is underlined by proposed state budget cuts.

This series previously noted a failed attempt by State House Democrats to restore funding for public education and social programs. While the Tribune discussed the “anger” of Democrats directed at the proposed $629 million in cuts to programs for the poor and elderly, the Gazette addressed emerging opposition by Republican legislators to Gov. Corbett’s plan to cut funding to state colleges and universities. Although revenue from shale gas fees may not compensate for both those multi-million dollar cuts, an author of a recent op-ed in the Gazette called on legislators to pass the fee – among other revenue measures, to spare primary and secondary schools a likely $100 million funding cut.

News from the last few days calls attention to the lingering economic stress confronting Pennsylvania. Significant funding cuts throughout the tiers of public education can only negatively impact the state in the long-run. Gov. Corbett’s refusal to raise any taxes and insistence on $275 million in tax cuts for businesses may be a sound political strategy in the short-run, but failing to invest education could deprive the next generation of the tools to create jobs in the other 99% of its non-mining labor force.

With a natural gas impact fee appearing to have bipartisan support, it should be passed as soon as possible with the intention of reducing the funding shortfalls for education. But for all the positive news coming out of natural gas expansion, there is no easy solution to the closures of the Sunoco refineries. Fortunately for President Obama, few pundits would predict a loss of the near sure-thing New England and New York electors as a result of rising gas prices. But the swing-state voters of Pennsylvania will likely weigh education and social program cuts against their energy frustration when they head to the voting booths.

State officials are concerned about proposed cuts by the Obama Administration to federal funding for water testing at the nation’s beaches. The move would come as the state legislature has already reduced its share of the cost, with the federal government now responsible for 75% of the funding. As should be expected, the risk to tourists of potentially unsafe beach vacations is discussed, with the state’s beaches noted for receiving 14 million visitors each year.

High school and college graduation rates better than the national average may play a part in the state’s higher-than-average student debt. Those who received a bachelor degree in 2010 accumulated an average of $25,250 in debt – a level that ranks the state 32nd in the nation. More troubling is a student-loan rate of 11.5% that is in itself higher than the national average. Even as state officials note that the rate may be inflated due to the treatment of students pursuing online degrees, the statistic is worrisome nonetheless. A significant factor in increasing debt burdens and defaults is the failure of students to complete their degrees after amassing considerable debt.

Ohio: “Shale: Bedrock for how many jobs?” The Columbus Dispatch, February 29th

A study by the Ohio Shale Coalition found that the state’s budding oil and gas industry will create nearly 66 thousand jobs and provide a $5 billion boost to the economy by 2014. Mining and logging currently represents less than one percent of the total state employment. The estimate falls between another industry study that boasted 200 thousand jobs in the next four years and an Ohio State University study that projected 20 thousand jobs. The Coalition’s projection is less impressive when considering that only half of the projected growth will come in the industry, while the others are expected in various service industries that would support the growth.

Public Service Co. of New Mexico (PNM), an electricity-provider, was criticized by a coalition of nonprofit groups for raising rates over the last three years despite the economic crisis. The coalition, which is largely comprised of environmental advocacy and renewable energy groups, noted that the company experienced a 26% increase – in nominal dollars, from 2010 to 2011. For its part, PNM argues that the increases were necessary to fund critical capital improvements and to enable to company to escape its own difficult financial circumstances. Even so, frustration from consumers should be expected, as rates have increased over 40% since 2008.