This is the first entry in “It’s the Economy, Stupid” a 15-part series analyzing the local economic news in five swing states.

If the acrimonious debt ceiling debate of this past summer, the maneuverings and failure of the Super Committee this past fall, and the pivoting and re-pivoting to “jobs, jobs, JOBS,” by every presidential candidate has not left you salivating for more economic news, then this series of weekly posts will not be for you. This series, “Blogging the 2012 Swing States,” will analyze, and critique the local economic news stories of five states that could decide this next presidential election.

As a senior at American University, it is difficult – if not impossible, to avoid the politicking ongoing just a short bus ride downtown in the heart of our nation’s capital.  It is that inevitability of encountering the politics of our federal government and its army of appointees, representatives, staffers, bureaucrats, and interns, which assembles the thousands who choose to study in Washington. But as students pack their bags and leave home for the city on the Potomac, it becomes all too easy to neglect the states that they left behind. In doing so, students ignore a rich resource of political intrigue and economic developments.

With 2012 underway, and a looming Presidential election next November, it is now an excellent opportunity to revisit those states – well some of them. For the next 14 weeks, this blog will analyze the economic news that plasters the headlines in five swing states from all five regions of the country. Those states were identified using a list of 13-swing states found on “270 to win,” an “interactive electoral college” database website that tracks historical vote trends for each state, and their most recent polling data.[1] Those selected have the largest number of electoral votes among their region and swing state peers: Pennsylvania (20), Florida (29), Ohio (18), New Mexico (5), and Colorado (9).

By definition those states will receive significant attention by both President Obama and his Republican opponent (including primary candidates). For that reason, the health of the states’ economies and the stories that drive their local news will provide a gauge to measure the relevance of then-candidate Bill Clinton’s memorable 1992-campaign phrase: “it’s the economy, stupid.”[2]

Unfortunately, the twenty years since Clinton coined that phrase have not all been smooth economic sailing. Although the Great Recession ended in June 2009, it concluded with a whimper and by virtue of a technicality – positive GDP growth indicative of a recovery.[3] As of December, the unemployment rate remains stubbornly above eight percent, with more than 13 million Americans out of work.[4] Opinions vary across the ideological spectrum as to the best way to accelerate this recovery: stimulus spending, tax breaks, cut regulations, etc. Still, each of the five states has its own recovery experience, and so for the next three-and-a-half months the highlights of their experiences will be discussed.

Posts will reference a range of pieces that can be found online in the three major, local newspapers from each state. Stories, op-eds, features, online-only blogs are all eligible for critique. As with any discussion of economics or politics, there are many stances to take on every issue. Rather than espouse a single ideology, the posts will be designed with pragmatism in mind, to point out logical oversights, to suggest ways the piece could be improved, and/or to forecast the story’s effect.

Continue below for more information about the five states, and check back each week for the latest post. The next five will emphasize each swing state in turn. But following those in depth introductions, the inspiration for each post will be consigned to the serendipity of current events. 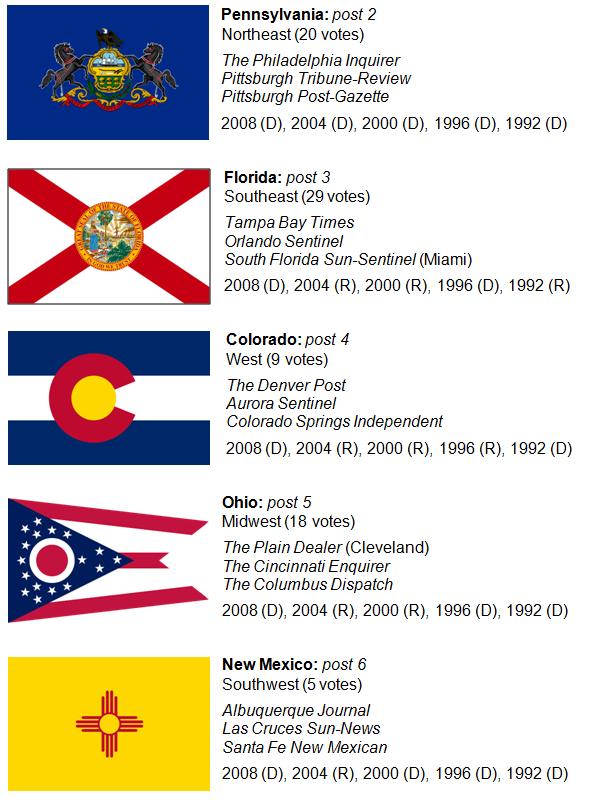 NOTE on selecting the final five states: From the list of 13 swing states, each was categorized according to its region: the Northeast (2), the Southeast (3), the Midwest (5), the Southwest (1), and the West (2). The state with the largest number of electoral votes was then selected from each region.