This is the fourth entry in “It’s the Economy, Stupid” a 15-part series analyzing the local economic news in five swing states. 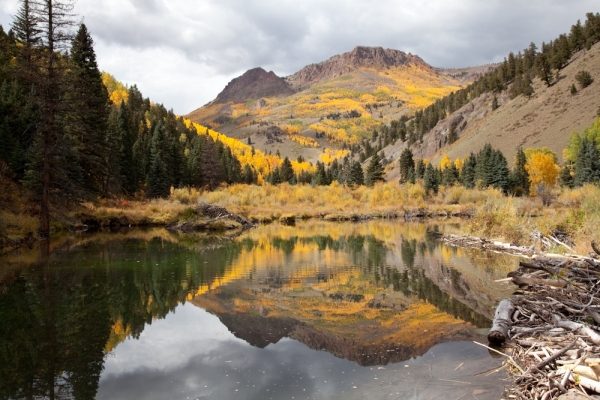 Lavish Aspen, Crass South Park, and the venerated Mile High home of Tim Tebow all claim a piece of this next state. Although no candidate is likely to mount his conquest of the square in van styled as a dog – à la Jim Carrey and Jeff Daniels, their equally ostentatious buses are certain to cover its four corners. This Western state is Colorado, and its economy has mattered to Presidential candidates since it became the Centennial State in 1876.

Mitt Romney experienced the quirks of its Republican voters, when its caucuses swung for Rick Santorum by more than 5-points, on Tuesday. This came four years after Romney defeated John McCain, et al. with more than 60% of the vote in 2008. For his part, President Obama will look to repeat his near nine-point victory in the state in November of that year, but he confronts nine electors who have only voted Democratic twice in the last twenty years. His victory was the first instance of a Democrat claiming more than fifty percent of the vote in that same span. But that statistic does not imply a red hue.

Colorado’s more than 3.4 million voters are divided in near even proportions among the reds, blues, and combined others and independents. Republicans have a slight advantage with 32.5% of registered voters, Democrats claim 31.7%, and the rest are the plurality at 35.8%.[1] Such a large proportion of unenrolled and minority party voters can make single-party sweeps difficult. Although the Republican surge in 2010 tipped both the Congressional delegation and State General Assembly in their favor – picking up two and six seats, respectively; Democrats sent Michael Bennet to the U.S. Senate, John Hickenlooper to the Governor’s Mansion, and expanded their State Senate majority by one.

Even though the State’s population expanded by nearly 17% in the past decade, it retains seven U.S. Representatives for its 5.1 million residents. A largely Caucasian group – at 81.3%, the State has a sizable minority of close to 21% of individuals claiming Hispanic or Latino ethnicity. This division has caused some friction with particular regard for undocumented immigrants, a subject that will be returned to later in the post. [2] But it is undeniable that Colorado punches above its weight.

With the 22nd-largest population it produces a Gross State Product of $258 billion, the 18th-largest. More impressive is its GSP per capita of $46,757 – 9th in the nation, which is more than four thousand dollars higher than the national average – far better than its Pennsylvania and Florida swing state peers. That ranking is likely due to high school and bachelors degree rates better than the national average, at more than 89% and nearly 36%, respectively.

Its labor force of 2.7 million individuals has largely rebounded since the recession. Outside of agricultural employment, 74% of residents work in the State’s top-five industries: Trade, Transportation, & Utilities (18%); Government (17%); Professional & Business Services (15%); Leisure & Hospitality (12%); and Education & Health Services (12%). The only industry to decline over the last 12-months was Construction.

The otherwise uniform trend of expanding industries is likely responsible for the State’s relatively low unemployment rate of 7.9%, as of the most recent available data from December 2011. Indeed, it may be lower today as the national rate fell to 8.3% in January.[3]  The largest employers in the state are: The University of Colorado-Boudler, Lockheed Martin Space Systems, Peterson Air Force Base, Exempla Saint Joseph Hospital, and the Transportation Safety Office.[4]

The availability of jobs often enters into rhetoric concerning the state’s estimated 180 thousand undocumented immigrants. The Colorado Alliance for Immigration Reform (CAIR) advocates steps such as instituting an immigration moratorium and rejecting all amnesty provisions. The group likely favored the failure of a 2011 instate tuition bill for the children of undocumented immigrants, which was defeated on a party-line vote in the General Assembly’s Education Committee after passing the Senate. Still, the Colorado Center on Law & Policy would likely approve of the decision by two Republican Assembly Representatives to support the 2012 version of the bill. That organization noted in a 2011 study that undocumented immigrants represent 5% of the State’s workforce, collect 3% of total incomes, but contribute 7% of the GSP.  Expect this issue to be detailed more in future posts.

Two changes were made to the sources of news pieces for those future posts. The Aurora Sentinel and Colorado Springs Independent were dropped in favor of the Pueblo Chieftain and the Colorado Springs Gazette after data from the Audit Bureau of Circulations indicated higher average readership of 43 thousand and 74 thousand respectively. The state’s largest newspaper, The Denver Post rounds out the three sources with an average readership of more than 350 thousand.

The state House of Representatives approved a fee that could range from $190 to $355 thousand dollars per natural gas well drilled in the state. Republicans presented the bill as an appropriate compromise, while Democrats argued that it was still too low to offset potential environmental impacts and to meet other budget priorities. The bill now heads to the Governor for his approval.

If enacted as amended, Seminole County schools would have limited options to close its budget deficit. It would prevent the country from closing schools or cutting arts and athletics programs in the wake of its failed attempt at levying a half-cent tax. The Republican sponsor would like the county to target administrator pay instead. A Democratic representative lambasted his colleagues for unfairly restricting a school system after approving $1.35 billion in funding cuts the year before.

In a state where defense contractor Lockheed Martin Space Systems is the second-largest employer, it should be no surprise that local business groups are attempting to secure one of the six new federal training sites for unmanned drones. If selected, it should be a boon to an industry that has grown 7% since 2006 and commands average salaries of nearly $144 thousand per year.

The state Attorney General is calling for new regulations for Marcellus shale hydraulic fracturing that would bring the state in line with many of its neighbors. Among other measures, he calls for dramatically increased civil penalties of $10 thousand per day as opposed to the current maximum of $20 thousand. With the job creating potential of natural gas drilling likely to be invoked, it remains to be seen if his proposal will gain any traction.

NOTE: States will be added to the “State Clips” section of each post as they are introduced in the blog.

Aspen photograph courtesy of the U.S. Department of Agriculture