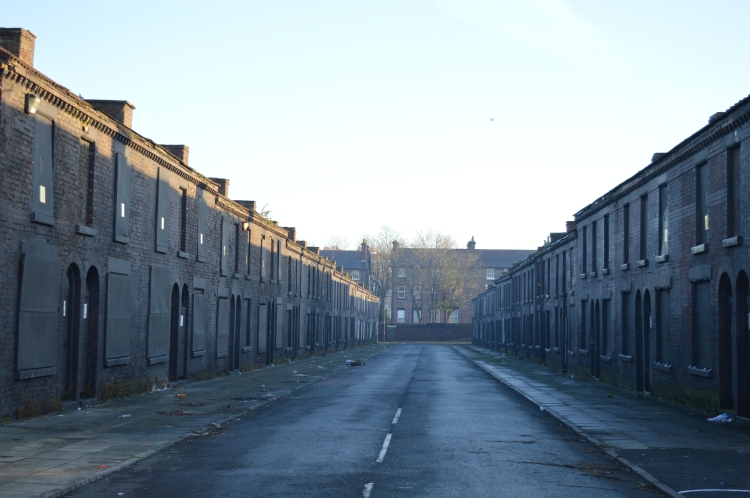 Vacant homes slated for redevelopment in the Welsh Streets neighborhood of Liverpool, England

Today, the Baltimore City Council will discuss Councillor Mary Pat Clarke’s proposal to revive a $1 home program from the 1980’s designed to rehabilitate long-vacant properties. This proposal contrasts with a nearly $700 million state and city effort to demolish and replace 4,000 such buildings.

Unfortunately, Baltimore has a great many empty buildings. The city’s population peaked at nearly 950,000 in 1950 and has declined each decade since then, falling to about 615,000 people in 2016. This population decline contributed to over 16,000 vacant buildings. Aside from being an eyesore, these vacant and deteriorating buildings may also attract incidents of violent crime.

In the face of this seeming intractable problem, the nearly $700 million investment to rid the city of many vacant properties might appear to be a godsend. Announced in January 2016, the four-year Project CORE (Creating Opportunities for Renewal and Enterprise) has nearly $100 million to demolish entire rows of buildings and leave lots that are “clean and green” according to the project FAQ. Further, the state has promised $600 million in incentives and subsidies from existing programs to spur new development. Not everyone is happy.

Preservation Maryland and Baltimore Heritage are urging the city to seek alternatives to widespread demolition. The two organizations call for stabilizing historic vacant properties through new investments in the city’s Vacants to Value program, which seeks to redevelop city-owned vacant properties, and earmarking money for that purpose under Project CORE. Reviving the $1 home scheme may also be a good place to start.

Councillor Clarke’s proposal comes with the backing of H.O.M.E.S. a Baltimore-based community advocacy organization focused on rehabilitating rather than destroying many of the city’s vacant properties. H.O.M.E.S. stands for Homeownership Opportunity for Mentorship and Economic Success. The group notes that under the original scheme, prospective owners would purchase the building for $1 and commit to living in and repairing it. The estimated cost to restore the properties was as a high as $100,000, so the city made low-interest loans available to new owners. According to H.O.M.E.S. no new owner defaulted on their loans.

Lessons from Across the Pond

Liverpool, England is one city to look to for inspiration for dealing with vacant properties. Like Baltimore, Liverpool is a port city that experienced a considerable population boom, peaking at over 846,000 people in the 1930s. As with Baltimore, developers built hundreds of thousands of brick row homes to house the city’s ballooning population. However, the shift to containerization made many port workers redundant (a chief source of employment), which, along with general trends toward suburbanization, led to decades of population decline. Liverpool hit a low of 435,000 residents in the 2001 Census.

Today, the city is undergoing a renaissance with its population increasing for the first time in decades according to the most recent Census. However, during the period of decline the city and national government implemented a variety of programs to manage its surplus housing. Unfortunately, the plans largely centred on clearing entire neighborhoods. Sykes et al. (2012) provide an excellent overview of this history. They note:

… post war clearance was truly comprehensive. The city’s 1966 Housing Plan proposed demolition of 36% of all its homes, and 70% of those in the mainly Victorian [row house] ‘inner areas’… By the mid-1970s some 160,000 people had been moved out of the city as part of this plan

In recent years, residents have resisted efforts to clear neighborhoods. Notable examples include The Welsh Streets, Granby Four Streets and in Anfield by the Liverpool FC stadium. Bowing to pressure to not tear down homes led at one point to a £1 for a home scheme, which was wildly popular with applicants (if not without controversy). In each case, the community sought to modernize and creatively reuse rather than demolish the old but otherwise sturdy buildings.

On Granby Street, a group of residents formed a housing cooperative, convinced the city to redirect the demolition funds to them, and began restoring the buildings themselves. Since then, the Tate has recognized their effort by awarding them the Turner Prize, which is ordinarily only given to contemporary artists.

On the Welsh Streets, developer Placefirst took over vacant Victorian row homes that the council had acquired through eminent domain and had planned to demolish until a public outcry and national government stepped in to block the plan. Last August, the first set of 24 (out of 300 planned) restored and modernized homes were sold in days, discounting a peculiar notion held by some on the city council that no one wanted to live in row homes anymore.

The Eldonian Village is one example that did not involve retaining the existing row homes. Plans by the city to demolish the homes in the neighborhood caught residents by surprise, who successfully organized and played a major role in the redevelopment of the community. The resulting development pattern is not my favorite–entirely single-use, detached homes and culs-de-sac–but by many accounts the community-led effort has been a success. 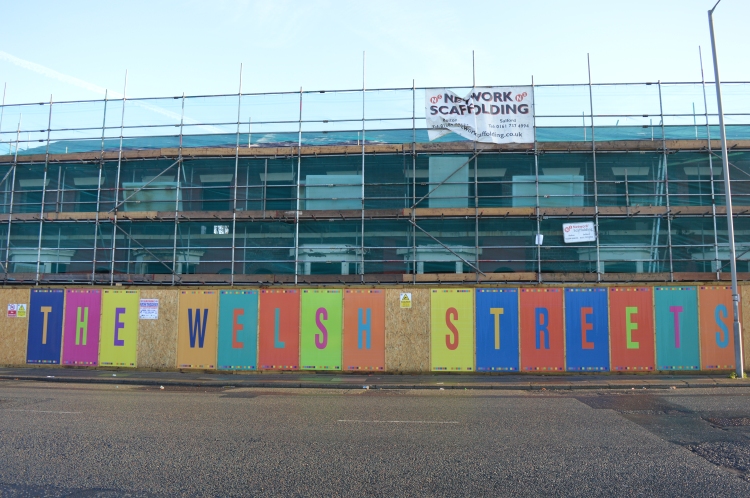 Work underway by Placefirst to rehabilitate vacant row homes on the Welsh Streets in Nov. 2016

While Liverpool is rebounding today, Sykes et al. (2012) point out that the promised renewal (and funding) never materialized in many of the inner city row home neighborhoods that were demolished. For cities with surplus housing, the choice seems to be between retaining derelict housing or having derelict brownfield, rarely “clean and green,” sites. The former may be preferable. At least the fine-grained row home neighborhoods have the chance to redevelop incrementally, while a large-scale demolition requires a considerable investment to yield what may amount to a coarser grained and less walkable city.

Instead, an American developer comparable to Placefirst could receive public financing to restore and modernize some vacant row homes. The city could relax zoning or other restrictions on the use of the abandoned properties, which could spark some creative reuse. Turning over some of the money to the community groups, such as H.O.M.E.S., as happened with Liverpool’s housing cooperatives, could also empower these residents to reactivate their neighborhoods. Reviving the $1 home scheme could enable residents to own a piece of their city. All of these options are messier and potentially harder than clearance, but that very messiness is what can lead to a thriving urban environment.

Baltimore should also consider the experience of its neighbor. Not too long ago, DC had plenty of abandoned row homes and a declining population. These homes are now selling for hundreds of thousands (if not millions) of dollars and the population is on the rise. Just as we couldn’t predict the urban renaissance underway in DC and other cities, we can’t predict what circumstances might change to make Baltimore row homes more attractive to potential buyers.

Imaginative ideas like the Maglev train, autonomous cars, or a successful Amazon 2.0 bid could ignite demand for the currently empty structures. Maybe the state will finally commit to serious mass transit investments instead of wider highways. Many formerly dilapidated row home neighborhoods in Baltimore have even been restored to life without these technical revolutions. Although a 300,000-person population deficit is daunting, shrinking household sizes mean a smaller population could fill up the same number of buildings. Unfortunately, spending limited resources on wholesale demolition forecloses on all of these possibilities.