Boston Tiptoes to Europe and Permits Drinking in a Public Park

Last Saturday, I was en route with a friend to the Hubweek Hub at Government Center when heading along the Rose Kennedy Greenway transported me to Europe. Not literally, of course, but on the walk from South Station to City Hall, we came upon a beer garden sponsored by Boston-based Trillium brewery. I was in awe.

My 13-months studying in Liverpool, England and exploring 10 European countries brought me to many public parks that had embraced alcohol. In all of the Royal Parks in Greater London, including the 350-acre Hyde Park in Westminster, people can bring and enjoy drinks so long as they do not charge anyone for them and everyone drinking them is of the legal age (18+). Cafés offer additional beverages for purchase.

In Lisbon, Portugal I discovered little kiosks surrounded by seating and trees, the perfect spots to relax with a drink in the hot Portuguese summer. Two of my favorites are Miradouro de Santa Catarina on a hill in the Bica neighborhood, which provides stunning views of the river and often has buskers playing guitars. In Castelo São Jorge, Wine with a View lets you enjoy a drink while admiring the city from the ramparts.

Albeit less regulated, in the student-heavy and counter-cultural Exarcheia neighborhood of Athens, the main square is a hive of activity. Several convenience stores across the street from the park sell single beers for 50 Euro cents or less. After enjoying them in square a person comes around to collect and recycle the empties. 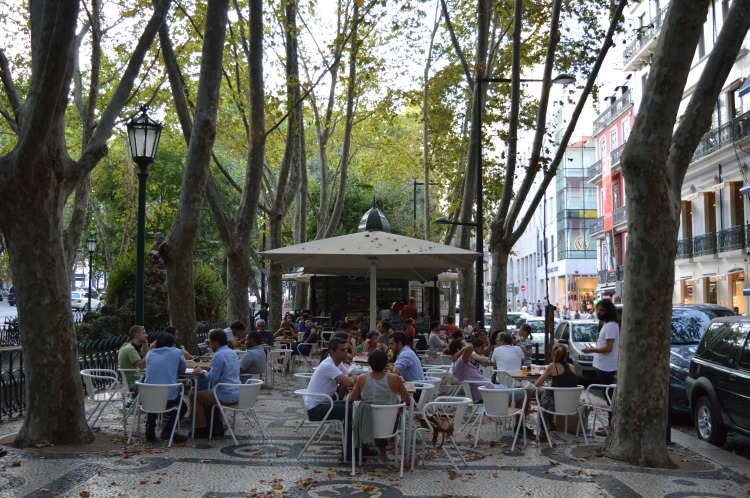 People enjoying drinks and snacks in the central park that bisects the Avenida da Liberdade in Lisbon, Portugal

Alcohol is of course not the only way to enjoy a park. However, these European examples demonstrate that it can be a way to encourage people to dwell in the space. In no case did I ever witness the people become rowdy and noisy. Families with children mingled freely with the young adults.

The demand for this type of outlet exists in America too. In DC, it’s an open secrete that players in the social sports leagues: softball, kickball, and bocce that use the National Mall are not carrying soda or water in their red solo cups. Picnickers in Meridian Hill and Rock Creek Parks often have bottles of wine in their totes. Unfortunately, this behaviour is illegal in National Parks, including the urban parks of DC. An at times overzealous National Park Service will occasionally raid weekend warriors and picnics. Trillium Garden shows a different approach.

The Rose Kennedy Greenway is a 17-acre linear park in the footprint of the John F. Fitzgerald elevated highway that the city demolished during the infamous Big Dig project. Since 2009, the Rose Kennedy Greenway Conservancy has managed the public park. Each time I return to Boston I have seen the trees and plants mature, new fountain and art installations appear, and countless people enjoying the space.

Last March, the Conservancy solicited bids to operate a beer garden on the greenway. Four-year-old Trillium Brewery won the competition. The Trillium Garden (also on Facebook and Twitter), with space for 250 patrons, opened on June 1 by the Rowes Wharf Hotel with views of the harbor under the arch. Draft beer and wine (from Massachusetts-based Westport Rivers Winery) are available at normal Boston prices.

Unlike Europe, the space is not entirely free-flowing. A uniformed security guard patrols the site and a bouncer checks IDs before letting people into the space. Still, the area welcomes families, with people under 21 receiving a stamp to indicate their age. A food truck usually parks just outside the fence, but people can bring their own food and any non-alcoholic beverages to enjoy. Friendly dogs are also welcome if they are on a leash. The garden is open from 4-10pm Wednesday through Friday and 11am-10pm on Saturday and Sunday. 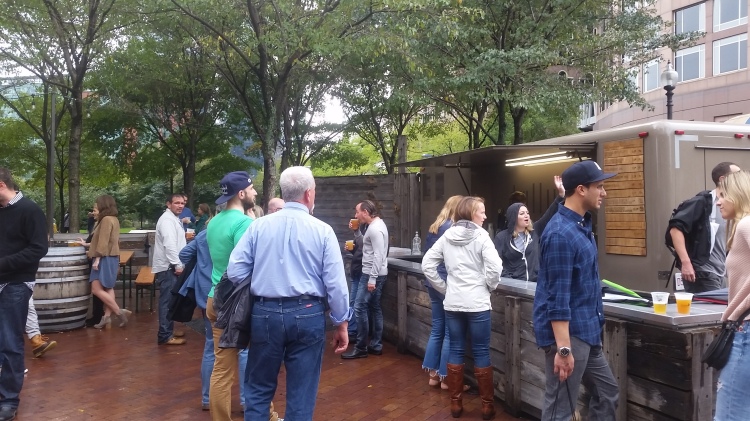 Opening a beer garden in one of “sleepy” Boston’s public parks is a step toward embracing the responsible drinking culture found in many European parks. Even on a wet Saturday afternoon in October, the space was full of locals and tourists out to relax on the picnic tables or stand by the upturned barrel-cum-tables.

At the end of June last summer, an annual funding stream provided by the state to the Greenway came to an end. Representing 40% of the Conservancy’s budget, the organization needed to get creative to maintain the high standards that Bostonians have come to expect in the park. The Boston Globe describes these funding challenges in detail.

For its part, the National Park Service is facing a considerable maintenance backlog due to lack of funding. Selling alcohol might be one way to ease those budget woes. In many ways, the infrastructure is already in-place to replicate the Trillium Garden on the National Mall. Kiosks that vend hot dogs, burgers, ice cream, sodas, and waters line the park. Tables are set-up around them. Like Boston, DC has local breweries: DC Brau, Atlas, Bluejacket, Hellbender, and more. I’m sure at least one would be interested in a Trillium-like arrangement.

In cities with ample public transit, bike lanes, bikeshare, taxis, and rideshare, people have many safe ways to enjoy an adult beverage in a park and make it back home or to their hotel. The upsides for the city are more people activating the space and more revenue to keep up with maintenance. Convincing the National Park Service to change its rules may be a long way off, but at least anecdotally, a friend in DC Parks and Rec would like to see the Department pilot a café or beer garden in a city-owned park.

Weather permitting, Trillium Garden is hoping to stay open through the end of October.  I will go back again before they close–if only to enjoy another Free Rise Saison–and I hope the Conservancy tries this again next year, if only so I can enjoy a little piece of Europe stateside.